Genealogy can often seem dry and lifeless, especially to those who do not have a passion for the search. Tree charts of our ancestors and fact sheets about their births, deaths, and marriages don’t really describe what life was like for the many generations who came before us. These tools can capture our relational links to one another and describe the great extended family to which we belong, but they cannot capture the essence of those lives or the context of history in which they lived. 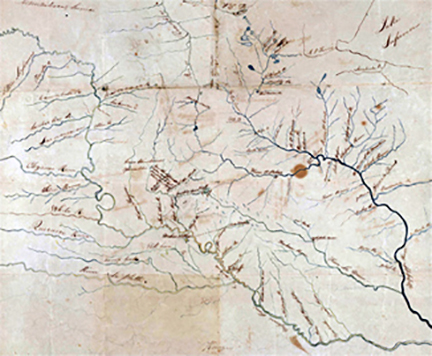 Rivers mapped by Lewis and Clark

Though we often speak of family trees, the history of a family is more like a river. It flows from many ancient rivulets and streams through generations of women and men to become the single stream of an individual life. As one stream merges with another, it expands to a become a river of even greater breadth, depth and diversity. When my wife and I wed, we brought together the Struckmeyer and Ochonicky streams into a broad new river combining German, Swiss, and Slovak tributaries. This is the story of that river and the many streams that created it.

This web site is intended to share the stories of the Struckmeyer family who arrived in the United States from Westfalen in Germany in 1872, the Sagner family from German Posen (in today’s Poland) who came in 1869, the Ochonicky (originally Ochodnický) family from Slovakia in Hungary who emigrated in 1906, and the Baer family from Canton Graubünden in Switzerland who traveled here in 1854. Throughout the centuries many other families have been part of this story, adding names such as Detering, Kelsch, Wilcke, Girthofer, Schuller, Bauer, Káš, Klč, Plašenka, Ammann, Clementz, and Lorenz to the mix.

These families emigrated to the United States in the latter half of the nineteenth and early twentieth centuries to escape war, economic hardship, and lack of opportunity in Europe. The trails they left behind are sometimes obscured by lack of remembered history or scraps of documented information. This is where genealogical research helps to clarify the story. A genealogist is like a detective. Piecing together family history is like solving an obscure mystery decades or centuries after the fact. Through a variety of sources, the researcher is able to uncover a clue at a time in an effort to create a clearer picture of family origins.

Our ancestors were real people who traveled across oceans with little more than a handful of possessions and a few dollars in their pockets. They brought their language, customs, and religion with them as they began new lives in a strange land. They settled in communities alongside others from their homeland for mutual support. They built homes, businesses, churches, and schools. And within a couple of generations they were assimilated into the mainstream of American life.

They were craftsmen, farmers, laborers, and housewives. Some raised crops on small farms on the Illinois prairie and many raised large numbers of children in their homes. They tried their hands at various trades and professions and managed small businesses—some successful and some not. They fought in wars on both sides of the Atlantic and suffered under repressive governments and economic downturns. They watched their children die in infancy and childhood. For most of them, life was not easy.

It is important to know who these people were, because they represent our roots. Their lives are the seeds of our own histories. And so, I want to tell their stories—at least in some small fashion.

In this website I have published narrative histories about our ancestors going back to my generation’s great-great grandparents. Of the 60 people documented here, many of the stories are still rudimentary—only brief sketches. Much research is still necessary to bring their lives to life. The thirty-two individuals in the earliest generation were born over a span of about seventy years, from the 1770s to the 1840s.

In only one case is the individual unknown. But even though we can identify nearly all of these ancestors by name, little is known about the lives of those in the earliest generation. The further back we go in time, fewer details are known about the history of each person. Sometimes the facts about their lives are thin, but to supplement the lack of personal information I have tried to capture the milieu in which they lived and worked and died.

These narrative stories are constantly changing and evolving as I learn new facts and details. The foundational research into the Struckmeyer and Sagner side of the family was conducted by Kurt Struckmeyer, while Joyce Kolnik did much of the research on the Ochonicky and Baer families.

Join me on this journey through one family’s history.

Theme by Anders Noren — Up ↑